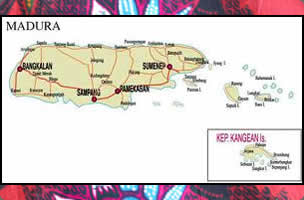 The Jokotole Naga Putih is a traditional Pencak Silat style from the island Madura.
The island is located to the North of East Java and residents of Madura are well known throughout Indonesia for their fierce and strong characters.
And this also counts for the movements within the Jokotole Naga Putih style. Because they are fast, hard and because they are practical, very effective.
Because of this, the Jokotole Naga Putih differs somewhat in relation to other styles and which can be related to the fact that the Madurese had an agreement with the Dutch colonial rulers.
For this agreement, the Madurese were allowed as one of the few to keep their own army and partially independent.

Did you know?
That in the late seventies the first Pencak Silat world championships were organized in Singapore?